Sunday 12th January 2014
Finally they cut the dead half tree down in the park!
You can see now how it improves the composition of our photograph! 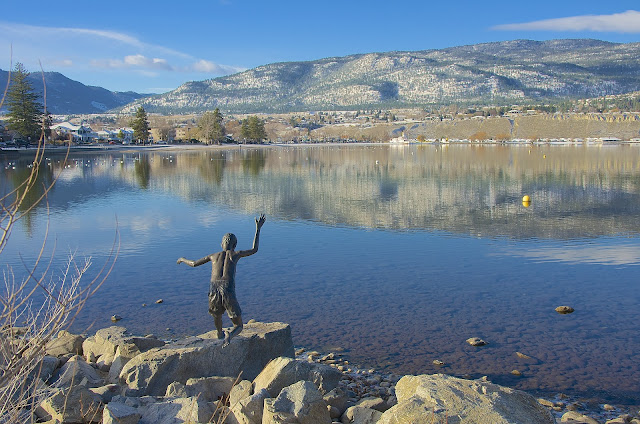 Today is a revisit to the bronze sculpture "The Romp" on Penticton's Okanagan Lakeshore. I tried to give some newer points of view photographically to this delightful sculpture. We were lucky to enjoy a brief high pressure zone in-between snow showers. for the photographs. You can see the icicles on the chin and thumb of the girl, so she really should be dressing up warmer! They have been here since 10th May 2011.
Artist: Chong Fahcheong.
Posted by Michael and Hanne at 9:59 AM 6 comments:


Here are a few examples of the use of oblique lines, and triangles of course. Verticals and horizontals are included here. Oblique lines may lead to more interesting subjects than horizontals and verticals, but that is open to personal interpretation.  A leaning fence post or tree sparks one's visual interest. The other note for today is a startling series of images I found from Cambridge. Enjoy here.
Posted by Michael and Hanne at 8:21 AM 3 comments:


There are many different ways of photographing. Recent new genres include "The Photography of Ruin" as in Andrew Moore's exhibition "Detroit Disassembled" or Camilo Jose Vergara's "Detroit is no dry bones" Recent exhibitions in London include Photos from the far east, Egypt etc, showing women's struggle for education and men wrestlers. You can always find more on Google of course. Maybe we should learn from these professionals and not always take our usual pictures....
In England's 19th Century the art of ruin became extremely popular, especially Greek and Roman ruin!


Both Andrew and Camilo started a new genre called variously "The Photography of Ruin" or "Ruin Pornography", or even better " Ruin Erotica"
Posted by Michael and Hanne at 10:39 AM 3 comments:

Going for a walk with friends


Walking with friends is a very ancient activity which can still be enjoyed today even without a Tim Horton's coffee, a water bottle, a pair of ski poles, or cell phone in hand. Camera in hand is a must however. Our friend Johann discovered a British Columbia Survey Marker post on the ground near an old fence on the KVR trail. Interesting. He was very observant. If you read it carefully we are to be punished by imprisonment if we remove it!
Vera his wife made us tea and crisp bread with Stilton cheese afterwards.
Here are a few photos from our walk.
Today all is covered in a few inches of snow, and the snow ploughs are out scraping and sanding.... No flooding here thank goodness!
Posted by Michael and Hanne at 9:39 AM 3 comments:

One thing leads to another on the computer these days, and today was no different.
I was looking at a nice picture of Cheekpoint on the river Suir
and it struck me there were some spelling mistakes. Should it have been a Checkpoint on the river Sewer?  No! There is a village called Cheekpoint near Waterford  in Southern Ireland and it is indeed on the river Suir. This led to other place names in Ireland, some familiar from their US counterparts such as Baltimore, others unfamiliar. Quite a few are preceded by the prefix "Bally". Now a Bally is a small division of land in Ireland, called also a Townland, and there are over 6000 named Townlands. At one point the Post Office tried to abolish all Townland names from postal addresses as being superfluous when Postal Codes were introduced, but failed completely in some areas. ( They are from two or three hundred acres up to 7000 acres in size)
They used to have them in England too but they failed to survive. The English words include Vills, Trefs, Towns, Townships, Baileys, and Shires. In the Isle of Man they had Treens.
So many types of land divisions to put fences around! So many fences in the world!
How about Walls next?

Here are a few fence pictures to go with today's post. One thing leads to another indeed! Thank you Mary for inspiring this post! This is Mary.
History is not in my baileywick! I usually leave all that to Helene and Alan.....
Posted by Michael and Hanne at 4:27 PM No comments:

Finally we are finished! The suspense is over! The world can go back to normal work/fight mode! Barack is Back! The best is yet to come!!


Here are a few photos from our walk yesterday on West Bench KVR trail. The weather so far is pleasant and warm and dry for November.
Posted by Michael and Hanne at 8:30 AM 2 comments: